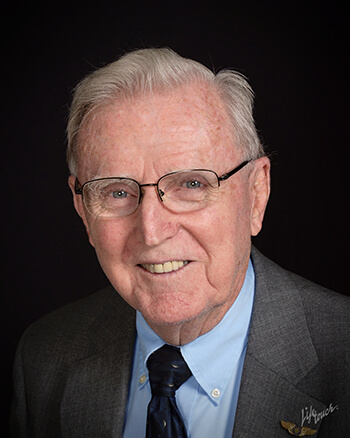 Helicopter Association International (HAI) is pleased to announce Michael Hynes, a 65-year veteran of the aviation industry, is the 2021 recipient of the association’s Lifetime Achievement Award. The award, sponsored by Bell, salutes excellence in management and leadership and is granted to an individual for long and significant service to the international helicopter community.

An airplane ride nearly 80 years ago ignited a fire in Michael Hynes that led to a 65-year aviation career.

Impassioned by that childhood ride, he joined the US Air Force when he was 17 to become an aircraft mechanic. He was stationed at Palm Beach Air Force Base after graduation and immediately joined the base Aero Club, eventually earning his airplane commercial certificate with a flight instructor rating.

In the first few years after leaving the Air Force, Hynes and a partner established a thriving airplane flight school and Hynes started a fixed-base operation, aircraft maintenance shop, and charter service, which was one of the first Learjet corporate operators.

In the 1960s, after hearing about a Bell helicopter that achieved a top speed of over 150 kt, Hynes saw potential in adding helicopters to his school. He acquired a Brantly B-2 helicopter in 1967 and taught himself to fly it, earning his commercial and flight instructor certificates in 1968. Hynes then formed one of Florida’s first GI Bill helicopter flight schools.

Not long after, he formed Brantly Operators, a maintenance and parts resource for the more than 350 Brantly helicopters in use. He transported parts in his Learjet from Wichita, Kansas, where Brantly Helicopter Corp. had relocated after being purchased by Learjet.

Hynes’s ties to Brantly soon led to him securing ownership of the two Brantly type certificates, a vast parts inventory, and full production tooling in 1971 when Learjet filed for bankruptcy. Hynes moved his Brantly operation to Frederick, Oklahoma, and created a new company, Hynes Aviation Industries. During those years, he received FAA production certification for the redeveloped helicopter, now called the Brantly-Hynes B-2. He also designed and tested fly-by-wire artificial intelligence systems for drones and remotely piloted vehicles (RPV). The Hynes H-5T, based on Hynes’s changes to the Brantly Model 305, won a multimillion-dollar Army RPV contract in 1984.

At the same time, Hynes operated his now Oklahoma-based flight school, assisting former Vietnamese military helicopter pilots to transition to successful piloting careers in the United States using Hynes aircraft. He was appointed as a designated pilot examiner to support the training and has since administered more than 800 airplane and helicopter flight exams to pilots from 38 countries.

Aviation has had its ups and downs for Hynes. He had backed a production loan for his US Army contract himself, and when payments from the army fell behind, he was forced into bankruptcy and had to sell his Hynes Aviation Industries assets.

Undaunted, he changed course and attended college, achieving his bachelor’s, master’s, and doctoral degrees. In addition to teaching high school and adult career and technical education courses, he has also taught at Western Oklahoma State College and Embry-Riddle Aeronautical University Altus Air Force Base campus. Hynes was appointed director of aviation education programs at the College of the Ozarks in 2003, where he worked and continued to perform consulting tasks for others in the aviation community until retirement.

Throughout his six and a half decades in aviation, Hynes has built 16,500 flight hours in 314 types of aircraft. He is one of the few individuals awarded both the FAA’s Charles Taylor Master Mechanic Award and its Wright Brothers Master Pilot Award.