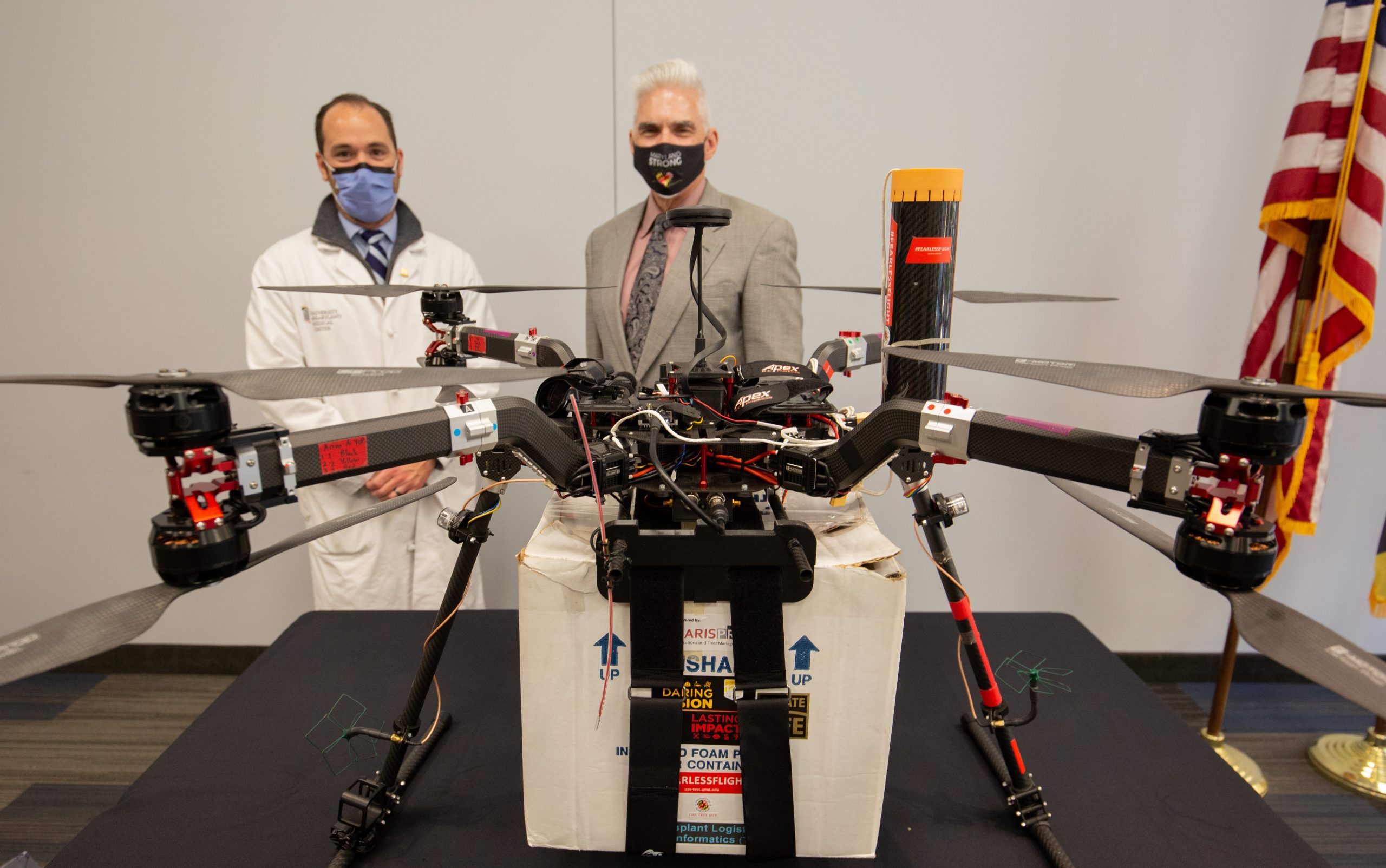 On the night of April 19, 2019, 44-year-old nursing assistant Trina Glispy waited at the University of Maryland Medical Center (UMMC), prepped for kidney transplant surgery as her new kidney prepared to take flight. In her eighth year of dialysis for kidney failure, she was beginning o lose hope. Destiny had another plan.

When Glispy learned she had a match, she was also offered a very specially opportunity. The kidney could be delivered to the hospital by drone – a medical first that would pave the way for faster organ delivery. Excited by the chance to make a difference, Glispy agreed to the delivery option.

As Glispy was prepped, an unmanned aircraft system (UAS) team, led by University of Maryland UAS Test Site Director Matt Scassero and UMMC Dr. Joseph Scalea, awaited the arrival of the kidney from the Living Legacy Foundation, Maryland’s organ procurement organization. Once secured, the kidney launched in a custom UAS, complete with real time monitoring equipment. It flew 2.8 miles in 9.52 minutes at 300 feet to the rooftop helipad at UMMC, beating the time a car would have made the trip in traffic. It landed smoothly with all organ monitor readings in the green and was soon on its way to the operating room for Glispy.

The idea of organ transport by UAS was born two and a half years earlier. Dr. Scalea approached Scassero after hearing about a fixed wing drone test his team had conducted carrying medical equipment across the Chesapeake Bay and asked if the same could be done for an organ.

“I was excited about the idea and challenge,” Scassero recalls. “This project was a lot more than a drone flight. We needed to develop a drone with redundancies to reduce risk and identify how to track the state of the organ while it was in transit.”

Scassero’s team embraced the challenge. The drone was built from scratch with multiple redundancies all the way down to a parachute system that could be deployed either automatically or manually to protect the organ.

The team also designed the first ever organ monitoring system. The system tracks the state of the organ in transport in real time – recording and uploading temperature, pressure and vibrations to the cloud for live monitoring. What’s more, upon landing, medical staff can remove the onboard SD card to review the same data.

“Nothing like this had ever been developed before,” Scassero says. “Currently an organ is tested after harvest then again after arrival before transplant to ensure it is still viable. With our monitoring systm, we discovered the kidney we flew remained well within the parameters; I’d even say better than it would have in a car or helicopter. The hope is one day this monitoring technology will replace the need for that second biopsy.”

Glispy is doing very well and has returned to many of her former activities. The technology that made that possible for her has also flourished. Members of the original team partnered with an investor to found MissionGO, a company that is developing and expanding this technology and increasing organ donation efficiency through a new software product.

True to the initiative that supported their research, the University of Maryland team is doing good.