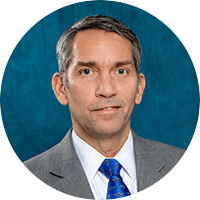 James A. Viola joined Helicopter Association International (HAI) as President and CEO in January 2020. Prior to joining HAI, he most recently served as a Senior Executive for the Federal Aviation Administration, in the office of Aviation Safety, as director of General Aviation Safety Assurance. He was responsible for maintaining consistency and standardization in the application of safety oversight activities for the GA community. He was a government representative on both the International Helicopter Safety Team and the United States Helicopter Safety Team.

Viola’s aviation career began with the US Army, with the majority of his flying done as a special operations MH-6 and MH-47 helicopter pilot. He was promoted through positions of increasing responsibility, achieving the rank of colonel. His final military assignment was as Division Chief for Army Aviation Current Operations in the Pentagon.

A strong advocate for GA, Viola flies as often as he can. He splits his time flying between a Robinson Helicopter and an AG-5B Tiger airplane, depending on whether or not a runway is involved. He holds airline transport pilot ratings for helicopters and airplanes and is a dual-rated certificated flight instructor. He has accumulated more than 6,500 flight hours, which includes 1,100 with night-vision goggles.