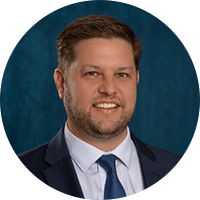 Cade Clark is the Vice President of Government Affairs for Helicopter Association International (HAI). Cade runs the federal and state government affairs program to promote and defend the helicopter industry in Congress and in the states.

Prior to his time at HAI, Cade served as the Vice President of Government Affairs for the Air-Conditioning, Heating, and Refrigeration Institute (AHRI), which represents more than 300 manufacturers of HVACR and water heating equipment. Cade was responsible for directing and managing the state and federal government affairs department, the education department and the industry’s scholarship foundation.

Previously Cade served as the Director of Regulatory and Government Affairs for the National Association of Water Companies (NAWC). Cade was responsible for developing regulatory and legislative policy and representing the Association’s members before State Public Utility Commissioners and Congress. He developed and directed security and critical infrastructure protection issues within the water sector, DHS and EPA. Cade also served as the Secretariat of the Water Sector Coordinating Council.

Cade holds a private pilot license, a BA in Political Science from Brigham Young University and a MBA from Colorado State University.